Six Things we Learned from the 2022 Six Nations Launch

Well there’s over a week to go and today we got our first insight into the teams battling for the Guinness Six Nations trophy this year.

Amidst the usual answers about favourites and how “every match will be a test”, we actually picked up some original views – some more interesting than others. Here’s our six learning points from the 2022 Six Nations media launch day.

In a Rugbystore exclusive, we found out that Gaël Fickou and the French team are big fans of Antoine Dupont’s “colourful” GQ magazine debut. Stand-in captain Fickou summarised it perfectly, saying:

“He suits it [the dressing gown]. Of course he does, he suits everything because he is such a handsome man”.

That’ll be sure to cheer Dupont up as he isolates following a positive Covid result.

England had a bad night’s sleep

After a long day of lifting sandbags along Brighton beach, you’d be hoping for a quiet night, right? Well any plans England had to get their eight hours were put into disarray last night as a supposed electrical fire erupted in their hotel, forcing a late-night relocation to temporary accommodation.

Nonetheless, Tom Curry and Eddie Jones looked in fine form this morning with the latter happy to embrace the disruption.

Ireland aren’t on their holidays

In comparison, Ireland are wary of the various gimmicks emerging from the England camp and want to focus on their own performances. In a classic Northern tone, head coach Andy Farrell explained:

“We’re not here for a holiday camp. What matters is that we put the work in to go out and perform on the biggest stage”.

While not named in Italy’s initial Six Nations squad, captain Michele Lamaro seemed pretty confident that Sergio Parisse will be making an appearance at some point in this championship. Discussing the impact the Italian legend will make when he joins the squad, Lamaro explained:

“He will be a huge inspiration for us and hopefully he will show some of his magic on the field for us as well”.

Pretty much since Gregor Townsend took over as Scotland coach in 2017, he’s been asked whether Scotland believe they can win the Six Nations that year.

His answer has always been a definitive yes, but this year there’s a sense of confidence with his words. Away victories in London and Paris last year brought the away form long hoped for while an opening round visit from England offers a strong platform from which to build a realistic challenge for the Six Nations title this year.

It’s a tough ask coming in as a new international captain, especially when you’re replacing a man of Alun Wyn Jones’ stature. But for Dan Biggar – who could reach 100 caps this tournament – he is very focused on staying grounded and not trying to change his attitude too much:

“I spoke to Alun Wyn last week and he just talked about being yourself, being honest”.

Well, he may need to watch out to avoid getting on the wrong side of refs again this year.

Has that got you ready for the action to kick off next week? Make sure you’re dressed for the occasion with our Six Nations collections where there’s something for every fan.

And, for all the latest 2022 Six Nations updates, check out our handy tournament hub! 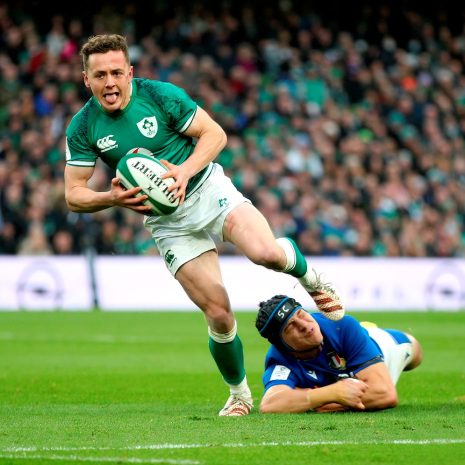